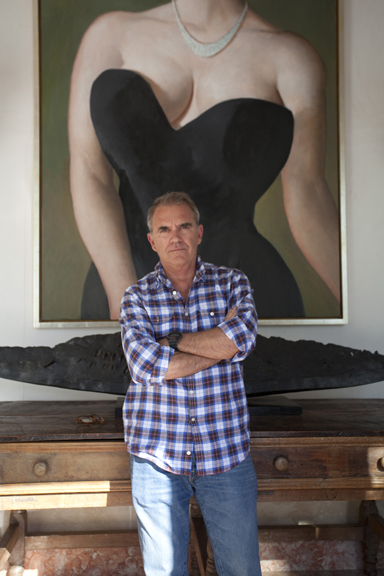 was born in Havana, Cuba, on March 12 1944. The son of a newspaper editor, he began drawing at a very early age. In 1961 his whole family moved to Miami, Florida. In 1962 they moved to Washington, DC and in 1964 to New York .There he began to draw political caricatures that were published by the New York Times, the Washington Post, the Chicago Tribune and Vogue magazine, among others.

In 1971 his first individual exhibition took place in the Pyramid Gallery in Washington, DC. In 1972 his work was exhibited in the New School for Social Research in New York and in 1973 he carried out another exhibition with the FAR Gallery in New York.

One year later, Larraz moved to San Patricio, New Mexico, fascinated by the light and atmosphere of Valle Hondo’s arid hills. There he met Ron Hall, whose gallery in Dallas,

Texas harbored his work for several years. Ron Hall would become one of his best friends. In 1983 he moved to Paris, where he stayed for two years. In this new environment he found inspiration for his paintings. While living in Paris, Larraz also travelled to Morocco. In 1984 he moved again to the United States.

In 1983 he met Nohra Haime whose New York gallery represented him until 1994. In 1998 he began to work with the Marlborough Gallery in New York which represented him for fifteen years.  Larraz moved to Florence, Italy, in the year 2000, staying there until 2004. Once again he found new sources of inspiration there. In 2004, Larraz began to work with Galleria D’Arte  Contini in Italy, marking the beginning of yet another great professional and personal relationship that continues to the present day.

Larraz frequently visits Italy, where in 2006 he worked on his monumental sculptures which were exhibited in Pietrasanta.

In 2014 Larraz began working with Ameringer, McEnery & Yohe Gallery in New York, Art of the World in Houston, Contini Art UK in London and Ascaso Gallery in Miami.

Julio Larraz is best known by his precise and detailed technique, his imagination, and his subtle touch. Nowadays, Julio Larraz’s work is more solid than ever. His art has become more concise and suggestive, not only in the brushstrokes that reflect the dexterity of a master painter but in the metaphors of his brilliant themes.